Vegas is a Top Producer with the Poodle Club of America. He sired three finished Champions in 2014. In 2016 two puppies he sired finished their Championships, he has met the requirements for the AKC Top Producer title.  This picture was taken when he placed 3rd in his class at PCA three years ago.  Vegas is structurally correct and has beautiful movement in addition to a sweet, playful disposition.

Vegas is a Top Producer again for 2018.  Three of his get from two different litters finished their championships this year: CH 5 Sister Limousine; CH Segraves Meet Me At The Ritz Carlton; CH 5 Sisters FrenchConfection.  It’s been a good year for dogs.

Iris is a girl with attitude!  Beautifully built, great movement and what an athlete.  She finished her championship by winning a 5 point major.  Magnificent ring presence.  Now you can find Iris racing around our property in pursuit of a Frisbee.

Iris has been placed with a wonderful couple, who live in the D.C. area and she is moving to Paraguay on June 14, 2016.  Iris is the only dog in this couple’s home.  She is basking in their love and it is a mutual admiration.  Iris is running 5Ks, following hand signals and, of course, playing frisbee.  She’s a lucky girl! 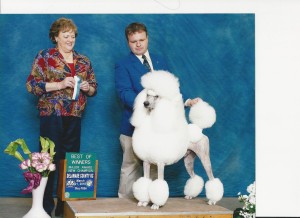 Frank started it all.  He was my very first show dog.  I learned a lot on my sojourn with him.  Frank is a big imposing boy and is retired.

Brother was the sole male dog in a litter of seven puppies.  My Father was the only boy in his family.  He had six sisters,  everyone including his parents, called him Brother.  My sister, Lelia, started calling this puppy Brother and the moniker stuck.

Brother finished his championship in 5 short weeks just a few days shy of nine months old.  He was a terror in the ring, but so beautiful and well constructed that the judges put him up in spite of his poor behavior.  He is the first champion I have bred.

Limousine is an exciting young dog.  He is gorgeous, very well put together with lots of “look at me” attitude.  When it was time for Limo to start his show career, I looked to Laurren and Chantz Segraves of Cleveland, Georgia to get him started.  They started him alright and finished him in very short order.  Limousine finished so quickly that we just kept on going and showed him as a Special til he aged out.

Look for 5 Sisters Limousine to be back in the show-ring around October 2019.  We have high hopes for this young man.

Sugar finished her Championship under the direction and care of Laurren and Chantz Segraves.  Sugar is a good girl, very athletic and always happy.  It is a pleasure to have her back home.

CH SEGRAVES MEET ME AT THE RITZ CARLTON 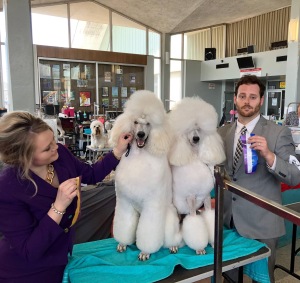 I kept three puppies from Iris’ litter of puppies.  One was a little girl who wore a yellow collar.  We called her Birdy and everybody loved that bitch.  I called the vet to pick something up for one of the dogs and the woman who answered the phone told me to “bring that little girl in the yellow collar”.

One day I received a phone call from a young couple in Georgia, Laurren and Chantz Segraves.  They said they wanted a show puppy.  I mentally rolled my eyes knowing how discouraging the world of conformation can be, but told them to come on up and check Birdy out.

They liked what they saw, took Birdy home, changed her name to Annabelle and showed her.  It was certainly an exciting week when Limousine finished with Annabelle finishing on his heels.  The Segraves are hoping to have puppies from Annabelle in early February 2019.

In the photo above Annabelle is on the right with Limousine on the left.  Aren’t they grand? 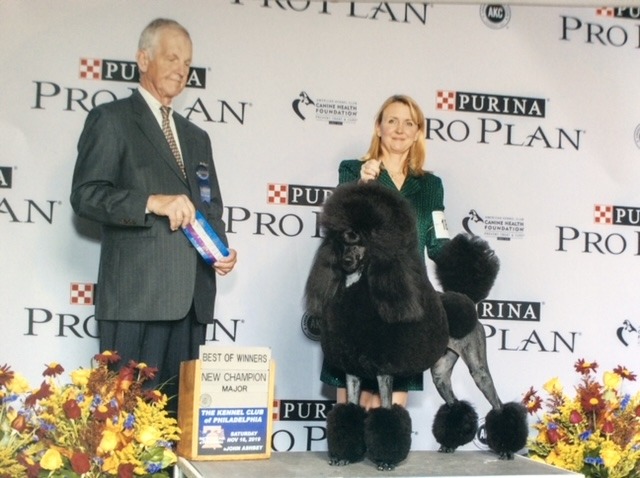 In a joint venture with Julia Swartz, we bred her bitch, Vee, to Vegas.  This produced a beautiful bitch, Maryland 5 Sisters Baltimore Beehive and we called her Hon.  My sister called Hon “Soldier Girl” because she was always standing at attention.  Hon has beautiful carriage and movement, a sweet and quiet disposition, wonderful temperament with a great sense of humor.  She lives with Julia and her pack of poodles and has whelped two litters of puppies.  Julia’s hoping there’s at least one standout in this last litter.

5 Sisters Summer Bouquet, Bou, is the best thing I ever bred. She is beautiful. Bou was being shown by the Segraves when COVID hit in 2019. She had one major when the dog show schedule came to a screeching halt and stayed there for more than a year.

I decided to breed Bouquet even though she had not finished her AKC championship. This breeding was a co-venture with Laurren and Chantz Segraves. Bou was bred to Dominion Avalanche, call name Versace, and on January 9, 2021 she produced a litter of 8 beautiful puppies.

Anytime you breed an animal, you are hoping to improve and preserve the breed. You want the offspring to be better than their parents. There were two standout puppies in Bou’s litter, a dog and a bitch. The dog, Hollywood, is pictured above. He is a beautiful mover, pretty head, happy disposition and fairly laid back. Hollywood finished his AKC championship as a puppy. The bitch, Remi, can be found on our “In the on Deck Circle” page.