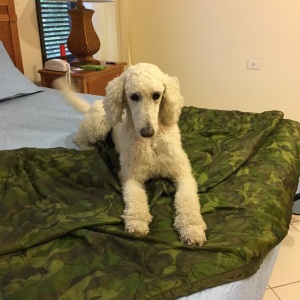 Paraguay is often called the “Heart of South America” because of its central location.  The Spanish and British pronounce it “Para gwi” with the i sound being long.  In the United States, we pronounce it “Para gwa” with the a sound being long.  Asuncion is the capitol of Paraguay and that is where I, Five Sisters Flower Power a.k.a. Iris, am living with my new family.

We arrived yesterday, June 16th, at our new home.  Here’s a picture of me in my new digs resting after our long trip.   I have a very happy tail.  The flight from my home in the USA to Asuncion took about eleven hours.  I was tired, but I really charmed the Custom Agents.  This morning I went for my usual run with my Mom and enjoyed the new smells, sites and sounds.  I’m really looking forward to this new adventure. 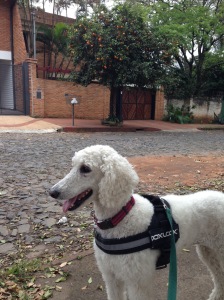 Out for a Winter walk this morning along a flagstone road.  See the orange tree across the street?  The trees are numerous and in the morning when the cars run over the fruit in the street, the entire road smells like orange juice and I guess it is.

While parts of the United States are suffering record highs, Asuncion is experiencing record lows for Winter.  Brrrrrrr…got to keep moving so we don’t get too cold.

Asuncion is the largest city in Paraguay and the majority of the people live in and around the city.  Asuncion accounts for 10% of the population of the entire country.  I like to check out the area. See if any other canines are close by.  Went out this morning to a local park.  It was beautiful.  The walking trail was nice like running through the tropics, oh, I am.  I could really run and so I did.

After a good long run, I like to rest and recover, after all, a lady always wants to look her best.  My favorite spot to rest is a recliner on the screened in patio.  Very relaxing.  Adios. 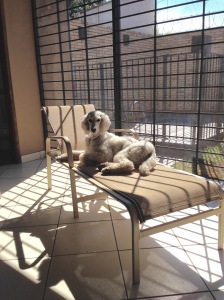